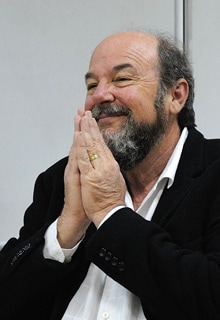 Wayne Liquorman was both a spiritual seeker and a family man with a successful export business, when he met his first and final guru, Ramesh Balsekar, in September 1987. In April 1989 the process of seeking ended when enlightenment happened through the body-mind mechanism called Wayne.

Wayne describes the event as being “of interest only to seekers.” His first book, No Way: A Guide For the Spiritually ‘Advanced’ was published in 1990 under the pen name Ram Tzu because he “didn’t want a bunch of miserable seekers cluttering up his living room.”

In fact, Wayne did not speak publicly until Ramesh asked him to do so during a visit to India in 1996. When he returned home, word had spread, and he started receiving requests to speak across the country, and then around the world.

The enlightenment event and its aftermath are described in Wayne’s second book, Acceptance of What IS, published in 2000. He is also the author of Never Mind… A journey into Non-duality, and the editor of Consciousness Speaks and several other books by Ramesh Balsekar, who referred to Wayne as his “spiritual son.” Since then he has written Enlightenment Is Not What You Think, and The Way of Powerlessness: Advaita and The 12 Step of Recovery. His most recent book, Hello My Loves: 10 years of writings to seekers of Truth, was published in 2015.

You are welcome to attend any of Wayne’s Talks

You can come with questions or just listen. His home Talks are livecast through this website. You can view his schedule at CALENDAR, where you’ll also find advice for out-of-town visitors. Ram Tzu (aka Wayne Liquorman) gives talks at his home in California, and throughout the world. You’re invited to meet him in person or tune into the live webcast. And you’ll find transcripts of his talks at NEWSLETTERS & TRANSCRIPTS and video at VIDEOS. You can order any of Wayne’s books, as well as CD’s and DVD’s of his talks, in our SHOP.

The teaching, as it happens through Wayne, is pure Advaita (non-duality), uniquely presented in an uncompromising, sometimes humorous way, without religious dogma or new age veneer. In his Talks, Wayne is without agenda, speaking only in response to seeker’s questions. He talks about Consciousness: the ground of all being, the source and the substance of everything.

“This Advaita, as I talk about it, is not actually a philosophy, because it does not hold any tenets. It is simply a collection of pointers and concepts, and it posits that none of them are true in an absolute sense. This teaching is not about conveying the truth. It is about prying away the limitations and misconceptions about how things are.”

Wayne’s message is clear and simple

Although he may suggest areas for further inquiry, Wayne offers no cures, practices, or miracles to reach enlightenment. He invites you to bring your most cherished beliefs to his Talks. If you are really fortunate, you may leave without them.

from Acceptance of What IS

The video below is from recent Talk at Wayne’s home. The False Sense of Authorship, beliefs and The Understanding are discussed, and Wayne points the seeker to look directly into the Truth for himself.

Wayne describes Ramesh as concluding his Guru Purnima talk in 1996 by saying:

“You should all come back tomorrow, tomorrow Wayne will be giving the Talk.” In that moment I could never have imagined where the Teaching would carry me… all the towns and cities and countries… all the men and women, old and young, some swelling with new life others preparing to die, all the hearts ready to burst open, all the brows unfurrowed and all the eyes bright with a new Understanding. What a surprise and delight this life is! I consider myself to be amongst the most fortunate of men, to have found my guru in Ramesh and to have been filled, a most unlikely vessel to carry this magnificent Teaching.

Here’s an audio recording of that first Talk. There was plenty of traffic noise at Ramesh’s, but it’s interesting to hear how little the Teaching has changed, despite Wayne’s recent refinement of terms.