The late Advaita sage, Ramesh S. Balsekar was a disciple of Nisargadatta Maharaj, himself a renowned Advaita master. Balsekar was drawn to Advaita as a boy, and particularly enjoyed reading about the teachings of Ramana Maharshi and Wei Wu Wei as an adult. After his retirement from banking, Ramesh discovered Nisargadatta Maharaj, who became his guru. Ramesh wrote nearly 50 books on Advaita, and starting in 1982, he met spiritual seekers daily at his home in Mumbai. He died September 27, 2009.

The Editor’s Notes for Balsekar’s book Consciousness Speaks recount the highlights of Ramesh’s life, and hint at the enthusiastic devotion that contact with this delightful teacher could inspire: 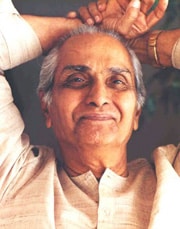 “The mere incident of enlightenment does not necessarily confer an ability to communicate the concomitant understanding. However, in Ramesh’s case that ability has assumed remarkable depth. This organism known as Ramesh is amply endowed with compassion, patience, humor and eloquence. Though the dialogues in his books can convey but a fraction of the impact that his presence can have, as you read you may get a sense of the energy that fills the room as Ramesh warms to his subject.

“Still, what is most remarkable about Ramesh is his very ordinariness and the very ordinariness of his teaching. Though elaborate theoretical structures may be erected around it — his concept of the working mind and the thinking mind would be a good example of this — the essence of the teaching is simplicity itself. He offers no miracles, no cures, no special powers; in fact, all he really offers is Nothing, that Nothing, that we all truly are.

“And while it is often said that Ramesh appears ordinary, no one could ever say he is mediocre. It is his complete lack of pretense that moderates the light of his accomplishments from a blinding brilliance to a warm glow. In his education, both in India and at the London School of Economics, he was always near the top of his class but never at the top of his class. In his leisure pursuits, as a body builder, competitive badminton player and golfer his standings were always superior though rarely superlative.

“Ramesh married Sharda in 1940 and they raised three children. The eldest was Ajit, brilliant but with a life-long history of health problems. He died in 1990 at the age of forty-nine. Next came his daughter, Jaya, who married and then moved to Bangalore where she runs a successful dairy business. His youngest son, Shivdas, is also married and is the senior executive in the Indian branch of a multi-national pharmaceutical company.

“It was in his career, which began in 1940 as a clerk in the Bank of India, that Ramesh’s brilliance truly shone through. Despite lacking a burning ambition, he steadily rose through the ranks until his retirement in 1977 as that bank’s General Manager (what is known in the U.S. as company president or CEO). During his ten years of service as its head, he guided the bank through its most rapid and successful growth period, overseeing the hiring of thousands of people and the opening of hundreds of new branches in India and around the globe.

“Shortly after his mandatory retirement at age sixty, Ramesh read a magazine article about a guru named Nisargadatta Maharaj who was teaching about Advaita (non-duality) in a poor area of Bombay. It was a subject in which he had always had a keen interest. He went to hear him, knew at once that this was his ultimate guru and within three or four months began translating for Maharaj at his daily morning talks. It was not long before Ramesh too experienced the ultimate understanding.

“Retired bank president, golfer, husband and father doesn’t fit the stereotype of an Indian guru… and perhaps that accounts, at least in part, for the fact that 90% of the people who come to him are Westerners. His background and education combine with his understanding to make him a master who is an ideal bridge between East and West, the spiritual and the material.”

Ramesh Balsekar touched the lives of a generation of spiritual seekers, seekers drawn to a deeper investigation into the experience of being alive. He was an energetic, imaginative, unpredictable teacher. We loved his compassion, clarity, questioning spirit and encouragement, and his humanity also left a deep mark.

Twenty-two years ago Ramesh came into my life… To have been able to walk beside him for all this time and to have been able to bow at his feet has been for me the greatest of life’s blessings. I shall miss not being able to sit with Ramesh, to watch a cricket match together or to share some chocolate or to laugh at some silly joke he reads from the newspaper. It is not the greatness of the man I will miss most — his greatness remains undiminished by his death — it is the little things, the human things.

A Net of Jewels

Possibly the best loved of Ramesh’s books, A Net of Jewels: Daily Meditations for Seekers of Truth was compiled by Wayne’s friend, Gary Starbuck. The format is brilliant, inviting a gentle savoring of each jewel. We’ve had a selection of meditations drawn from the book here on the website since it first came out in 1996. Others have followed suit, including a Yahoo group that emails a jewel every day, and now an app for your Android device.