Although Ramana said almost nothing to Paul Brunton during his visit in 1931, the publication of Brunton’s A Search In Secret India made them both famous. The notoriety brought Somerset Maugham, Mercedes de Acosta, Julian P. Johnson, Arthur Osborne, Maurice Frydman, Merston Ethel, Henri Cartier-Bresson and many other Westerners to Ramana’s ashram. The avalanche of publications they sparked, presented this unique and now beloved sage to a wider world. Almost as unusual as Ramana’s obviously spontaneous and beautiful realization was his willingness to overlook the tradition of caste in sharing it with Americans and Europeans.

Realization is the result of the Guru’s Grace more than of teachings, lectures, meditations, etcetera. These are only secondary.

The final truth, as Ramana Maharshi and Nisargadatta Maharaj and all the sages before them have clearly stated, is that there is neither creation nor destruction, neither birth nor death, neither destiny nor free will, neither any path nor any achievement. All there is is Consciousness.

from Who Cares? by Ramesh Balsekar

Even after his death in 1950, there was enough interest to keep Ramana’s ashram going, for many more books, and starting in 1964 for a magazine. Ramesh first heard of Nisargadatta Maharaj when the book I Am That came out, and was reviewed in the magazine. Ramesh wrote, “It had such an impact on me that I went to see Maharaj straight away. And the first day I knew ‘I am home, this is where I belong.’ I went to Maharaj in 1978, exactly a year after I retired.”

Thoughts alone make up the mind;
And of all thoughts the ‘I’ thought is
the root.
What is called mind is but the notion
‘I’.

from Upades Saram by Ramesh Balsekar

In 1927 Ramana composed a thirty verse poem summarizing his teaching. Unlike other writings, he composed this as an integral work without revision. He considered it important enough to prepare in four of the major Indian languages. What follows is a portion of an English-language interpretation by Ramesh Balsekar’s disciple Shirish Murthy.

In the vast ocean of cause and effect, actions happen and impermanent results follow. If one takes them as ‘my’ actions the idea of having a free will gets stronger. This sense of personal doership gives rise to a feeling of guilt or pride and effectively blocks the spiritual understanding that everything happens according to the will of God. 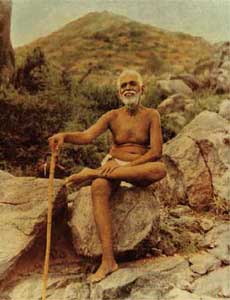 When there is total acceptance that all actions happen purely by the will of God, and if the fruits and the consequences are accepted as His grace, the mind gets purified and attains freedom from expectations.

Accepting and understanding that God has created the world for His sport and God is playing thelila through billions of body-mind organisms, is better than chanting the sacred names of the Lord, which in turn is superior to worshipping the image of the Lord with body, mind and speech.

When there is an understanding that God himself has become the manifestation; when, by His grace, one feels His presence in the phenomenal existence one obtains the blessings of worshipping the Lord of eight-fold forms without neglecting one’s responsibilities.

Understanding that nothing happens according to ‘my’ will and merely witnessing the billions of body-mind organisms act under God’s will is excellent. It is superior to singing the glories of the Lord or reciting His sacred names.

When there is an understanding that God’s will prevails all the time and witnessing happens without any ‘one’ to witness, it is like the stream of ghee(clarified butter) or the flow of a river. This is true meditation. It is much better than meditating with an assumption that one has free will.

By the grace of God or the Master when one is firmly established in the ‘I AM,’ devoid of the thinking mind, with an impersonal knowing that there is no ‘me’ to get involved, that is Supreme Devotion.

The dissolving of the thinking mind in the Heart, purely by the grace of God or the Master, is true devotion, Yoga and understanding.

Through the act of regulating breath the mind is subdued, just as a bird is restrained when caught in a net. This helps in checking the involvement of the thinking mind at that moment.

Thought and breath have their origin in Consciousness.

The thinking mind can be temporarily suspended through the control of breath. It can be annihilated only when there is total understanding that God’s will prevails all the time and the different forms are only puppets having no free will of their own. With this understanding three beautiful things happen: there is no ‘one’ to feel guilty or proud, to get frustrated or to have a sense of enmity. Life becomes simple. 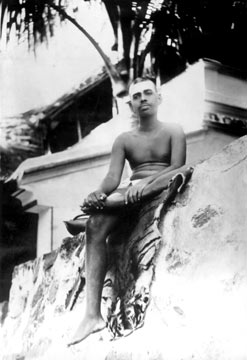 The Sage, whose thinking mind has been destroyed by the total acceptance of the fact that nothing happens unless it is the will of God, and Who rests in the ‘I AM’ does all the actions with the knowledge that Consciousness alone functions through the billions of body-mind organisms.

When the enquiry, “What is the thinking mind?” occurs, the thinking mind understands intuitively that it has no free will and stops thinking itself to be the doer and gives way to the feeling of ‘I AM.’ This is the Direct path.

In the ordinary man when a thought occurs the ego takes delivery of it as ‘my thought’ and gets involved. The thinking mind is nothing but the ego identifying with a thought and getting involved. In the enlightened Sage, when a thought arises, witnessing happens and involvement with the thought does not take place. Ramana Maharshi says, “The Sage has no thinking mind and therefore there are no ‘others’ for him.”

When one enquires, “Where has the ‘me’ come from?” it will vanish into Consciousness revealing the truth that the ‘me’ has really come from Totality as part of the ‘divine hypnosis’. Consciousness has created the ego and Consciousness will annihilate the ego by initiating the process of Self-enquiry.

When we accept that God’s will prevails all the time and not the individual will, the ‘me’ as the doer gets smaller and smaller till it gets completely merged in Consciousness.

When the sense of personal doership disappears with the total acceptance that “All there is, is Consciousness,” the thinking mind ceases to exist during the waking hours as in deep sleep. What remains is the light of pure Consciousness, the indestructible ‘I AM.’