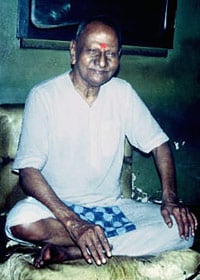 The great Advaita Sage Nisargadatta Maharaj was born Maruti Kampli to devout Hindu parents on a small farm south of Mumbai in 1897. He left at 18 and settled in Mumbai.

In spite of his poverty and lack of formal education, a forceful personality and desire for independence led him to start a string of eight retail shops that eventually employed 30 people. He also married and fathered four children.

“A tremendously complex work is going on all the time in your brain and body, are you conscious of it? Not at all. Yet for an outsider all seems to be going on intelligently and purposefully. Why not admit that one’s entire personal life may sink largely below the threshold of consciousness and yet proceed sanely and smoothly… A healthy body, a healthy mind live largely unperceived by their owner; only occasionally, through pain or suffering do they call for attention and insight. Why not extend the same to the entire personal life?”

He had an interest in spiritual matters that worldly success did not satisfy, and in 1933 he was convinced to meet a friend’s guru – Siddharameshwar Maharaj. He quickly became a disciple and took the name Nisargadatta Maharaj. Shortly after the death of his guru in 1936, Nisargadatta attained realization.

“My Guru ordered me to attend to the sense ‘I am’ and to give attention to nothing else. I just obeyed. I did not follow any particular course of breathing, or meditation, or study of scriptures.”

He left his family and business, expecting to live a life of renunciation in the Himalayas. He wandered for several years until persuaded by another of his guru’s disciples to return to his family responsibilties and the life of a householder – he saw that a life of dispassionate action would be more fruitful.

You can be described only in terms of what you are not.

He lived in Mumbai for the rest of his life, selling cigarettes in the one shop that had survived his absense. A small crowd gathered often at the shop to hear him talk about the non-dual nature of reality, and after he retired in 1966 he gave talks at his apartment twice a day. Many of the talks were recorded and transcribed, and a few were filmed.

Maurice Frydman translated 101 of the talks and published them in 1973 in India as I AM THAT. Frydman’s earlier associations with Gandhi and Ramana Maharshi had made him famous in spiritual circles, and through the promotion of this book he introduced Nisargadatta to English-speaking people around the world. The appearance of this remarkable and powerfully resonant book drew so many people to Bombay that Nisargadatta said with some exaggeration, “I used to have a quiet life, but I AM THAT has turned my house into a railway station platform.”

The clearer you understand on the level of mind you can be described in negative terms only, the quicker will you come to the end of your search and realise that you are the limitless being.”

from I AM THAT

That sprouts and grows and brings forth flowers and fruits.

In the talks at his apartment, Maharaj was open to sincere questions, but intolerant of spiritual speculation and theories. He aggressively directed seekers away from preconceptions and scripture, and toward direct experience. He was often the very opposite of the stereotypical gentle patient guru. He would challenge, contradict, criticize, scowl and shout in an effort to get his questioners not to understand him, but to understand themselves.

“What you have learned here becomes the seed. You may forget it apparently. But it will live, and in due season sprout and grow and bring forth flowers and fruits. All will happen by itself. You need not do anything: only do not prevent it.” 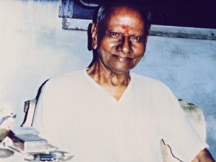 One of Maharaj’s notable Western devotee’s was a California woman named Jean Dunn. Like Frydman, Dunn had spent time with Ramana Maharshi before his death in 1950, and that association led her in 1978 to write an article about Maharaj’s teaching for The Mountain Path, the journal of Sri Ramanasramam. It was an article that attracted the attention of the then recently retired Ramesh Balsekar, who subsequently read I AM THAT and sought out Maharaj’s Talks.

An eBook called I Am Unborn, prepared from notes of Maharaj’s 1979 talks is available here for free as a 130 PAGE PDF FILE.

You cannot realize your Self.

I AM THAT was finally published in the United States in 1982, shortly after Maharaj’s death in 1981, and at about the same time as three more English language books compiled by Jean Dunn. Two of Dunn’s books, Seeds of Consciousness and Consciousness and the Absolute, (as well as I AM THAT are AVAILABLE IN OUR SHOP.

“In Nisarga [nature] everything is time-bound (seasons, sowing, reaping, etc.), but nature itself is not time-bound. Nature is neither male nor female. Many Avatars come and go, but nature is not affected. The story of nature is emanating from all the impressions taken in your mind since birth. So long as you are holding these memories there will be no knowledge of Self. If you just study whatever has happened in nature, like history, great lives, etc., you cannot realize your Self. You have to go within. Whatever great things have happened in nature, however powerful, still they disappear right here. These situations appear and disappear. This is actually abstract, what is solid here is the knowledge ‘I AM’. It is invisible before the birth and after the death of the body, and while it is visible it is a solid thing. Many great Sages have appeared and disappeared because of the powerful seed ‘I AM’…

You may experience Brahma even, but that experience will not remain. All experiences are due to the cell ‘I AM’…

What can Roosevelt or Gandhi do now? In the very places which they were commanding changes have taken place. Why don’t they talk? When the prana leaves the body even great Sages cannot speak.”

from Seeds of Consciousness